Posted on February 18, 2015 by Freddy Jaramillo

Why Chinese people are Chinese and not otherwise.

If you ever happen to visit China you might realise that in addition to the fact that Chinese people are nice, they also seemingly do things differently than what you will see elsewhere on the planet. To demonstrate this statement let’s just pretend that you happen to go to China. Then, by an inexplicable turn of destiny you get to go to the small town of Dazu, or 大足, as it is called by the locals. (Dazu is very close to Chongquing, but that is not important for our story). 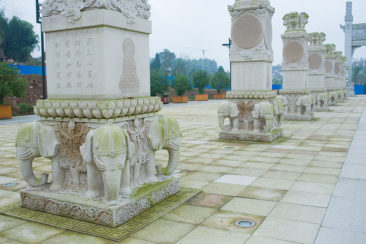 Dazu is where the historic Dazu caves are situated. It has been named a World heritage site by UNESCO and a historical site of importance “1st category” by the Chinese ministry of Culture ( as well as other titles too long to describe here) in order to make us appreciate the importance of the site. All these titles are displayed at the entrance of the site.

Before going you should know that before entering the caves you need to walk approximately for 20 minutes from the main entrance of the site. I think that the reason for this walk might be that our Chinese friends have a thing for staging a grand entrance. 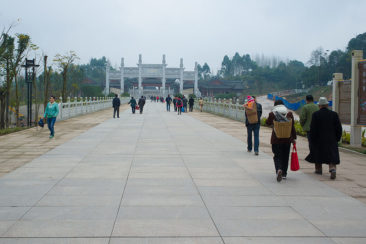 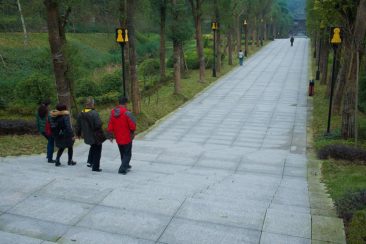 However, this works rather well because at he end of the last lane and just moments before entering the last curve of the trail you crash into the most awesome historic site ever, without any warning, whatsoever! 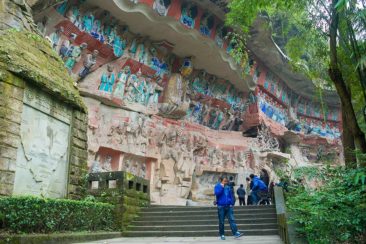 To help you better understand this wonder let me provide you with some additional information about this site in order to provide some historic context. This site is part of a regional sculpture group containing almost 50000 Buddhist statues carved patiently on the rock on site is one of the best preserved in all of China. One of the monks living there spent 70 years of his life sculpting these statues. These statues remained isolated for hundreds of years, which is what protected them from the mischief of those naughty boys – the red guards, during the cultural revolution in the sixties.

But I am stalling, let’s get back to the main subject. As I was saying this is possibly one the most awe-inspiring historic sites on the planet. 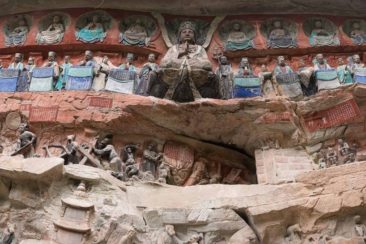 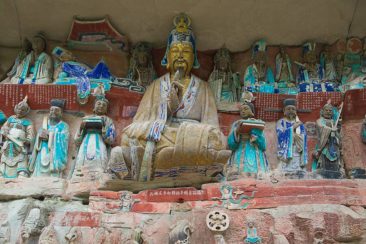 In spite of the fact that my pictures cannot show just how big the site is, I can say that most of the statues are representations of Buddha, his reincarnations, and different scenes depicting the activities of the era when the statues were carved. Just compare the size of this charming guide with the sculpture she is showing and you will get a small idea of the size of the whole site. Because that is why Chinese people are Chinese, they do everything better, faster and bigger than the rest of human beings on this planet! 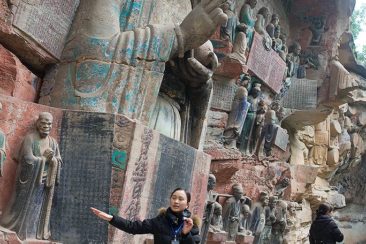 After you recover from this first amazing experience, you can continue your visit by appreciating the great level of detail of each element of the sculptures. The details are so sharp, It almost looks like the sculptor only completed his work yesterday. 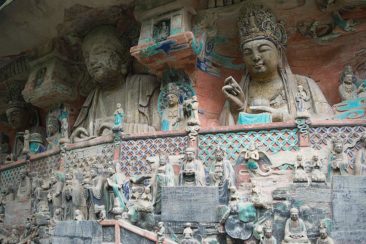 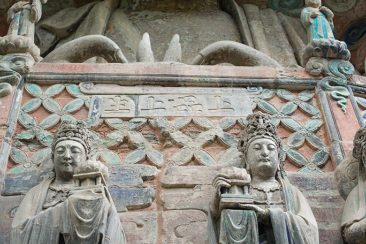 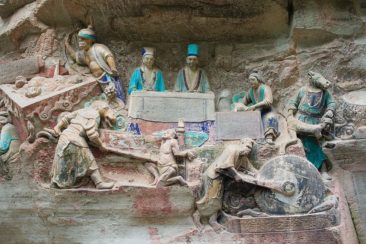 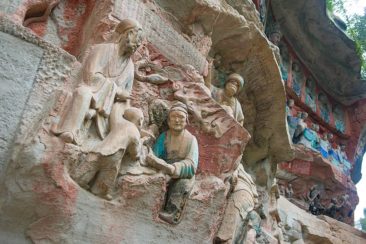 And just at the moment when you wonder if our Chinese friends could not craft a more perfect set of sculptures, you then come upon this important historical figure, famous for praying, meditating and sleeping (at least as depicted in sculpture). Kind of a cool job, don’t you think? 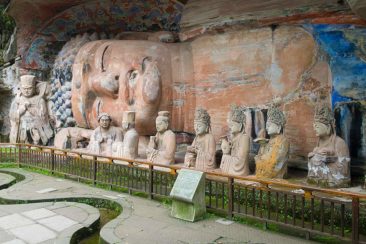 Yes, you guessed it , the statue represents the Buddha, also known by the name of Gautama Buddha, a.k.a. Siddhartha Gautama to his buddies. Represented here doing the thing he did so well: resting calmly, taking a nap!

The sheer size of the statue gives you an idea of how essential taking a nap is in China. Incidentally, taking a nap is a right written in the Chinese constitution, and I am not joking! 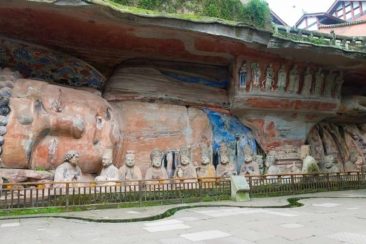 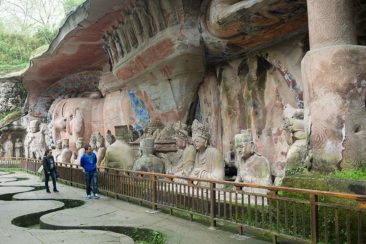 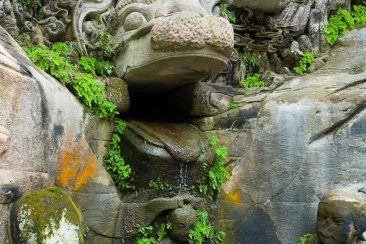 But wait! It is not over yet! The second part of the site contains even more statues, even more Buddha representations, gods, nobles, the different stages to get to the Nirvana, and also some “fashion shows” of the era in which these sculptures were carved. 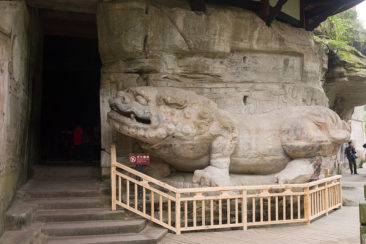 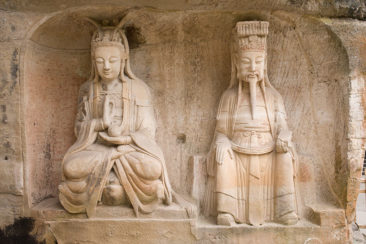 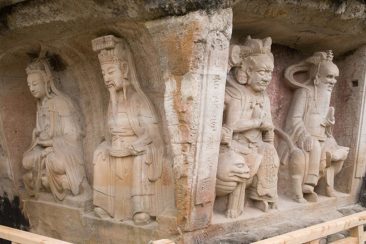 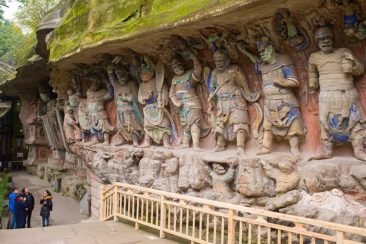 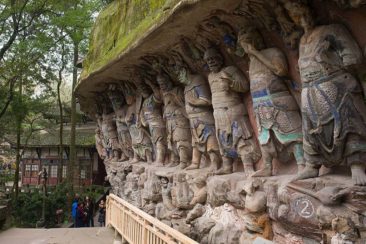 For example you pass in front of an ensemble of three statues called the “Three Gallant Knights”. One of them has on his hands a small stone building, which is none other than a pagoda weighing almost half a ton! (500 kg) You may be interested to know that this Pagoda has been there for the last 800 years without any cracks or degradation whatsoever. The reason for this because the sculptor carved big monk’s habits (robes) for the three Knights, these stone habits are the structure that holds the hands of the statue and the pagoda all together, thanks to the habit the pagoda does not fall.

In essence, the habit does not make the monk but the pagoda.

Take a moment to reflect about this profound idea…. 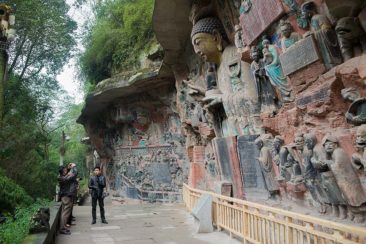 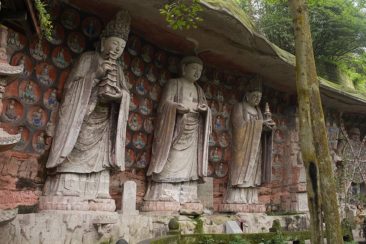 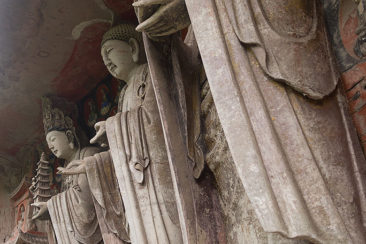 Finally, let’s just pretend that you have seen all these, came out safe and sound from all these cultural wonders, and you leave the site and go back to the town of Dazu. You may want to know that if you walk towards the north of the village, which is easily reached on foot, you will find another site where you will also have another amazing sculptural experience with the big entrance, the curve, the last lane, the crash etc… The site is smaller but great all the same!

But, that my dear reader, is another story! 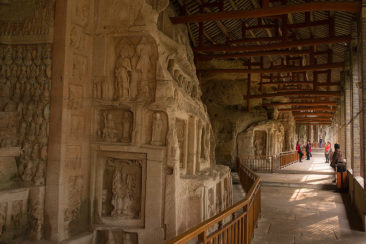 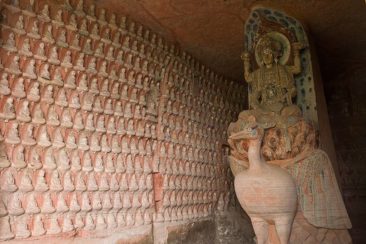 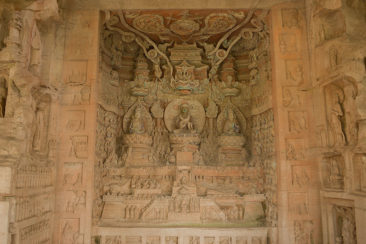 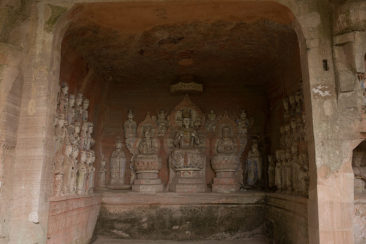 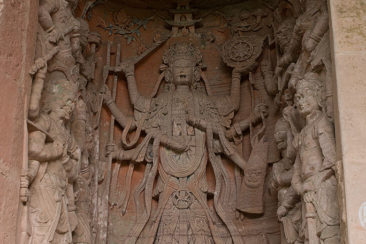 If you want to go to the Dazu caves, you need to go to the city of Chongquing first. Once there you can catch a bus to the town of Dazu. From Dazu, you need to take bus number 205. The bus stop is just outside the bus station and it will get you to the site.

Nobody, and I repeat, almost nobody in Dazu speaks English. But don’t worry about that, in spite of this, everybody will understand where you want to go. You just need to ask for directions saying loud and clear: 大足?